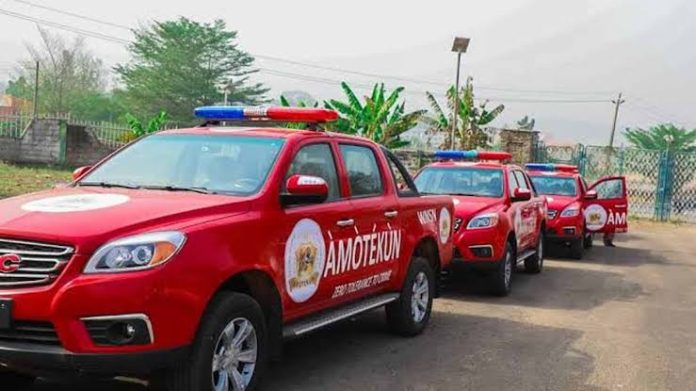 They were arrested for committing offences such as conspiracy and armed robbery, cultism, burglary, stealing and ritual offences.

State Commandant of Amotekun, CP David Akinremi (rtd.) said that the suspects were arrested in various areas of the state as part of efforts, to rid the society of crime and criminality during the yuletide.

Akinremi said the operatives in Ijebu-East local government arrested one John Eze along Sagamu expressway for allegedly robbing one Lucky Odigbo, driver of a Toyota Picnic passenger car, containing nine others, all friends were returning from a party in Imuren, along Ijebu-Ode/Epe Expressway, close to Nigerian Brewery, Imagbon.

The Amotekun boss explained that, the suspect with two others  dispossessed the victims of valuables, which include, the sum N127,300.00, Android phones worth N129,500.00 and others items belonging to other six victims who are not forthcoming for fear of being trailed by members of the gang.

He said the suspect has since been handed over to the state Police Headquarters for further investigation and prosecution.

Also, operatives of Amotekun in Abeokuta South, while on patrol on Wednesday, December 15th, 2021 at about 7am arrested Adio Nafiu and Ewuoso Tobi caught with a Senwei generator, and two lions sewing machines.

He said on interrogation, the two suspects confessed to stealing the items from Mr. Nofiu Busirat, mother of Adio Nofiu, one of the suspects.

When questioned as to what led to stealing from her mother’s residence, the suspect responded that they were looking for a way to get rich-quick.

This led them to consult a ritualist, named Alfa Wasiu Ayinde who demanded the sum of N20,000.00 before he could give them charms to make them rich.

Nofiu explained that since they never had such amount, Adio Nofiu and his partner in crime decided to break into his mother’s room, stole the items and on their way to sell to would-be-buyers, before the long arm of the law caught up with them.

In another development, operatives of Abeokuta South Local Government while on Abeokuta township patrol on Saturday, December 25th, 2021 at about 9pm within Sokori area, and on the trail of two notorious suspected cultists, saw some miscreants dealing in weeds suspected to be Indian hemp.

Commander Akinremi explained that as the team were disembarking from the vehicle, the suspects took to their heel, but his men were able to apprehend two of them.

Akeem Ibrahim also confessed to have just been discharged from Ibara Prison for similar offence.

The second suspect who was caught with two wraps of weeds admitted to have been bought from the first suspect. Both suspects are being transferred to NDLEA for further investigation and prosecution.

The Amotekun boss therefore used the opportunity to re-assure members of the public of its determination to provide adequate security to the good people of the state and to appreciate them for the support given to the corps in the discharge of its mandate.

However, he warned criminal elements that may wish to test their will not to embark on suicide mission as there will be no hiding place for them in the state.