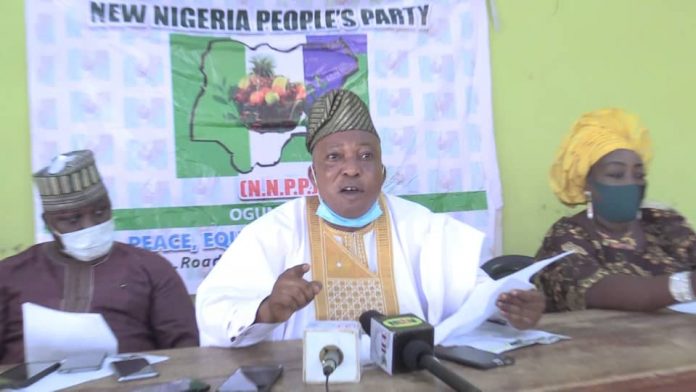 Ogun State 50 billion naira debt controversy between Governor Dapo Abiodun and his predecessor, Senator Ibikunle Amosun has not augured well with the New Nigeria People’s Party (NNPP) just as the party has given Abiodun seven day ultimatum to publish the state account record in national dailies.

NNPP Chairman in Ogun State, Comrade Oginni Olaposi in a chat with newsmen in Abeokuta hereby condemned the controversy about the debt, noting that such argument and counter-argument showed incompetence of governor Abiodun-led administration.

In his address, he expressed displeasure over the controversy that
trailed the 50 billion naira which the state government claimed was allegedly omitted in handover note of the Senator Amosun-led administration almost two years ago.

Oginni further challenged the governor to publish the statement of account of the state so as to confirm sincerity from his part.

“Today, we are here to condemn the anxiety, the unnecessary controversy between governor Dapo Abiodun and former governor, Senator Ibikunle Amosun on the controversy of 50 billion naira debt that was hidden.

“As a matter of fact, it is shameful that governor Abiodun with his knowledge in the private sector is coming to tell us in Ogun State that he did not know what is going on in the financial statement of the state in the last two years.

“I think as a governor that prepare for governance, the first thing to have call for is clear auditing of the account of the state. But he failed to do this, and after two years, he is coming here to tell us that there was about 50 billion naira debt that was hidden.

“We have said it repeatedly, that most of the people working with him are not competent, and are not fit to be at Oke- Mosan. I am challenging the governor to publish the fund realized from the COVID-19 donations and funding too, ” Oginni asked.

“NNPP, being an opposition party with dignity and trustworthy, we are giving a seven days ultimatum to governor Abiodun to publish the financial statement of the state in at least in four leading national newspapers in Nigeria.

“We want to know the record of Ogun State and on about what is happening since he took over from May 29, 2019 till date.

“We want to have that, and we think that must be published. The Ogun State people have the right under freedom of information bill to know what is happening concerning the account of the state,” he stated.

It could be recalled that the DMO in the report revealed that the Dapo Abiodun-led administration borrowed N58 billion as domestic debt in 18 months.

But, the state government in a counter reaction claimed that the figures given to it by the immediate past administration did not capture the entire liabilities it left behind.