Zhang victory making it the second time is coming barely six months after he received his handicap from the club. He has been regarded as one of the fastest growing golfers in recent time.

Captain of the club, Edward Ikpomwonsa Osayande in his address thanked all the participants for coming out in large number for the event.

He noted that the monthly golf event would be organized accordingly every month. He Acknowledged the club elders for showing the younger ones the way forward. 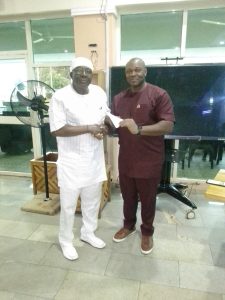 Similarly, in his victory speech, Zhang remarked that his passion for golf on daily basis has propelled him to this victory adding that he loves the game and that is the reason for playing on daily basis including on Sunday.

He further stated that hard work and his zeal has earned him the second trophy within six months, noting that he has many others to win before the year ends.

In the men’s event, General Oscar Iyare (hcp 10) emerged winner with 73 net ahead of Otali Uteh (hcp 14) who played second fiddle with 74 net while Dr. Mojeed Momoh (hcp 19) picked the third spot for playing 75 net after beating the duo of Engr Esosa Ojomo and Gordon Imadiyi on count-back. The highlight of the event was the presentation of monthly mug trophy to the overall winner Zhang while he is entitled to use the winner’s car park till another winner emerge at the next month edition.