The Federated Chapel of the Nigeria Union of Journalists (NUJ), Edo State Council has elected new Executive members that will pilot the affairs of the chapel for the next three years.

At the end of the chapel election presided over by the Secretary and Treasurer of the Union, Comrades Andy Egbon and Solomon Obozunya respectively, Comrade Mercy Onyenweli, publisher of Crusaders Magazine emerged the Chairperson with a total vote of 17.

Her opponent, Timothy Omobude who was absent at the election having saw the handwriting days before the election hereby recorded just a distant one vote.

Other members were elected unopposed, they were Comrade Lucky Ighuomaye as Secretary; Justy Oteri as Financial Secretary while Anita Erhenhi emerged as Treasurer. 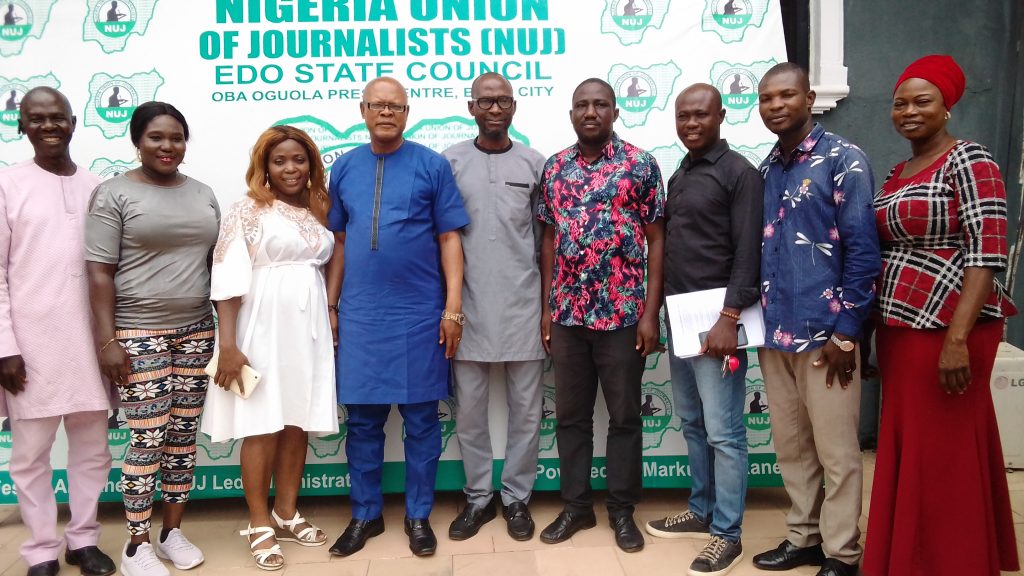 The were however sworn-in by the Chairman of NUJ, Comrade Festus Alenkhe just as the event was witnessed by other members of the Union who also served as observers at the election regarded as free and fair in the recent period.

In his address, Comrade Alenkhe urged the new Exco to carry all other members along irrespective of the outcome of the election, adding that there must be harmony and unity and to relate well with the state Union.

She assured that she will not take the responsibility lightly, will draw points from Alenkhe, whom she reference as Pacesetter, who inspired her to be part of the Union once again.

“We will work on structure built by Comrade Alenkhe for greater heights. I want to thank Federated Chapel members for cooperation and support. We are going to work as a team to move the chapel forward,” she vowed.

Newsnigeriaonline.com.ng recalls that 32 members were eligible to vote out of which 18 were accredited to vote based on payment of Check-Off Dues and other issues.