As at time of filling this report, the final medals table released by the Chairman, Games Services which comprised the total numbers of medals won by all the thirty six states including Abuja revealed that three silver medals were conspicuous missing on the table.

However, this situation calls for scrutiny of all the medals won by each states and to find the missing link since the numbers if gold are expected to takky with that if the silver medals respectively. 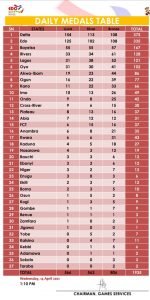