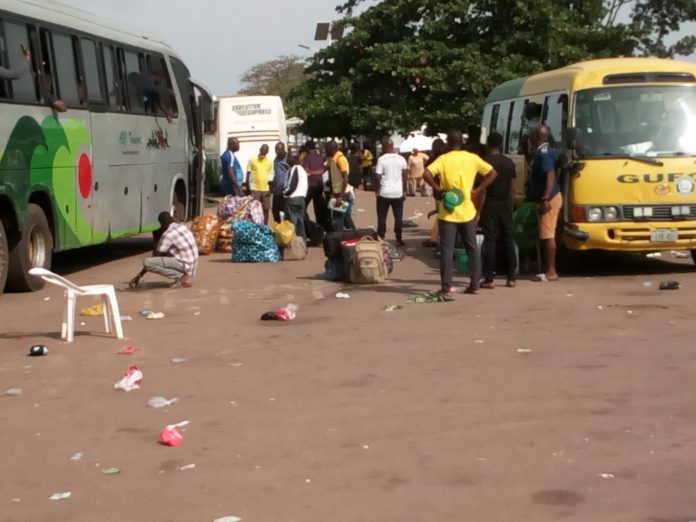 It was a happy return as Ogun State contingent to the 20th National Sports Festival which ended in Benin, Edo State yesterday arrived Abeokuta, the capital city safely.

The Team Ogun led by the Director of Sports, Ogun State Sports Council, Mrs. Folakemi Oluwarotimi Iyabo left the Games Villages at University of Benin, Ugbowo amidst jubilation and gratitude to the Almighty God for injury free and wonderful performance at the two weeks sports event.

It could be recalled that the first batch of the team left on Tuesday to Abeokuta with over seventy athletes having completed their various games at the festival.

The contingent, being the second batch traveled in three luxurious buses, coaster bus and many other vehicles while the security personnel attached to the team were at alert clearing the way for any unforseen circumstances along the highway.

The state athletes and officials in spite of being awake as early as 4:10am could not leave the ancient Benin City due to delay on the part of the transporters, but was amicably resolved by the management.

However, as at time of filing this report all the vehicles have arrived the capital city just as athletes and officials are already in their way home.

Newsnigeriaonline.online.ng reported that Team Ogun under the leadership of Mrs. Folakemi Oluwarotimi Iyabo, the Director of Sports finished as the best eight state in terms of sports performance at the sports festival with a total of 78 medals.

The team put behind the disappointment back home to win 16 gold, 23 silver and 39 bronze medals in various events to be among the 10 top rated states in Nigeria, the record that could have been better had it been the team had proper and adequate preparation to the Nigeria version of Olympics Games.