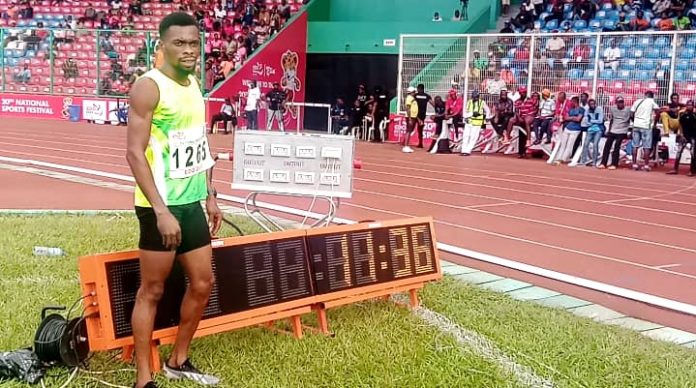 Team Ekiti on Friday joined the list of state with gold medals at the 20th edition of the National Sports Festival holding in Benin City, Edo State, eight days after the commencement of the festival.

Tunde Adewole wrote the Fountain of Knowledge State name in gold after coming top at the final of the men’s race for partially impaired athletes when he clocked a time of 11.39 seconds to emerge winner ahead of other contenders.

The joy in the camp of Team Ekiti knew no bound as the single gold medal has pushed the state up to the middle of the medals table.

Elsewhere, the state scrabble players have progressed to the next stage of the game after beating their counterparts from Imo State.

Actions began on Friday in Ayo olopon as Ekiti representatives drawn against the likes of FCT, Delta and Kwara states lost in the men’s singles while the female event resumes today

Moreover, all the five badminton players from the state crashed out of the festival as they lost to their respective strong opponents.

In boxing, Ekiti female boxer, Alade Oluwatobi knocked out her opponent from Abia State in the second round of 60kg to move to medals table at the sports fiesta .

In Athletics, three female sprinters, Blessing Aguda, Adetutu Aladeloye and Sayo Oluwole have qualified for semifinals coming up today while in the men’s category, Igbagbo Owolabi, Gboyega Adelola and Adekalu Fakorede have also qualified for the semifinal.

There were injury scare for some Ekiti gymnasts at the sports festival, though contest for medals still continues in the coming days at various events .